More cannabis cultivators than ever are using LED lights in their grow rooms. Understanding the benefits of LED grow lights and how they affect cannabis growth is helpful to optimize your cultivation results and help you grow better flower.
LED Grow Light Benefits:
LED lights convert electricity to light directly. That means they use electricity more efficiently and emit far less heat than traditional grow lights.

Cultivators’ investments in LED typically pay off in as little as two years with energy savings. Greenlight also provides complete energy rebate services that find every federal, state and local rebate that cultivators qualify for.

Cultivators have a large selection of LED options, but high-quality LED fixtures from trusted brands deliver the best light, longevity and features. As LED grow lights age, their lumen output depreciates (especially with cheaply-made LEDs). A poorly-performing or aging LED delivers fewer photons to your cannabis. With substandard or old LED grow lights, you will witness:

What cannabis cultivators should know about PPF and PPFD

PAR (Photosynthetically Active Radiation) defines the type of light (electromagnetic radiation) needed to support photosynthesis in plant life. Through photosynthesis, plants convert light energy into chemical energy, which is the food they use to grow and thrive.

When selecting a lighting system that triggers photosynthesis, three measurements are important:

Cultivators aim to purchase LED lights with best horticultural efficacy, which measures the plants reception of the blue and red light on the PAR spectrum.   Photosynthetic photon efficacy (PPE)  should be above 2.1 µmol/J or better for indoor growing facilities that have 1000 ft2 or more of canopy. In greenhouses where both the sun and supplemental lighting are used, the PPE  should be greater than 1.7 µmol/J in facilities with the same 1000 ft2 or more of canopy.

The industry standard for measuring grow light efficiency is micromole per joule (sometimes written as umol/j, μmol/j, umolj-1 or PPF/W).  That means that for every joule of electrical energy (joule = watt * second) a certain number of photon micromoles are produced.  The higher the number the better.

Cultivation terms and acronyms can be confusing, but a quick review will help you deliver optimum lighting to your plants (and therefore, grow better cannabis).

The first measurement is Photosynthetic Photon Flux (PPF). This measures the photosynthetically active photons emitted by a lighting system per second. This measurement is expressed in “micromoles per second”. Note that the PPF does not tell us how much of the measured light actually lands on the plants (see PPFD below). PPF is expressed by scientists and light engineers as: μmol/second.

PAR defines the type of light needed to support photosynthesis, while photosynthetic photon flux determines the amount of PAR that is created by a lighting system each second. It is one of the most important parameters indoor gardeners use to monitor their artificial lighting systems.

Plants primarily use wavelengths of light between 400 to 700 nanometers to achieve successful photosynthesis (considered red light and blue light). The light within this range is called photosynthetic active radiation. PPF represents the measurement of all the photons in this range.

Quantum sensors are the main tool used to measure the light intensity of plant lighting systems. Although PPF does not equate to how much of the measured light will actually fall onto the plants underneath a particular light, it is still an important measurement in knowing how efficient a lighting system is at creating PAR.

Additionally, knowing the PPF of a lighting system does not denote the quality of the spectrum of light that plants receive. 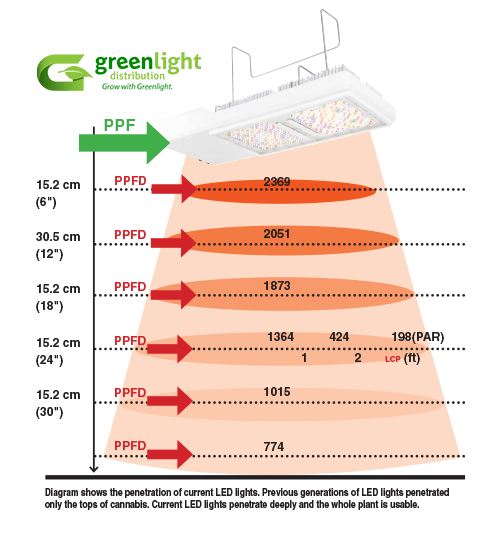 The second measurement is Photosynthetic Photon Flux Density (PPFD). This measures the light that actually arrives at the plant. “PPFD” measures “the number of photosynthetically active photons that fall on a given surface each second”. PPFD is a ‘spot’ measurement of a specific location on your plant canopy, and it is measured in micromoles per square meter per second. This measurement is expressed by scientists and light engineers as: μmol/m2/s.

The third measurement is Day Light Integral (DLI) which measures the total amount of light that is delivered to a plant every day. This is the plant’s daily dose of light DLI measures the number of “moles” of photons per square meter per day and is expressed as: mol/m2/d. DLI is the most important metric for determining the overall growth rate of plants. Once you know the preferred DLI of your plants, you can easily set up a lighting system to deliver the required amount of light. Properly designed photosynthetic lighting systems start with defining the required DLI.

There are huge numbers of photons or “light particles” in visible light. We cannot express it using normal numbers, so we use two measurements used by scientists when measuring huge quantities. The first number — a Mole —  is equal to something called “Avogadro’s number”, which is 602,214,150,000,000,000,000,000. A micromole is a millionth of a mole. A micromole of photons is 602 quadrillion. Since these numbers are so large, it is easier to reference quantities of light in moles and micromoles.

Photosynthesis occurs inside of specialized organelles known as chloroplasts, and is the process that uses light energy to split water (H2O) and fix carbon dioxide (CO2) to produce carbohydrates (CH2O) and oxygen (O2). See the diagram for a simple representation of photosynthesis. 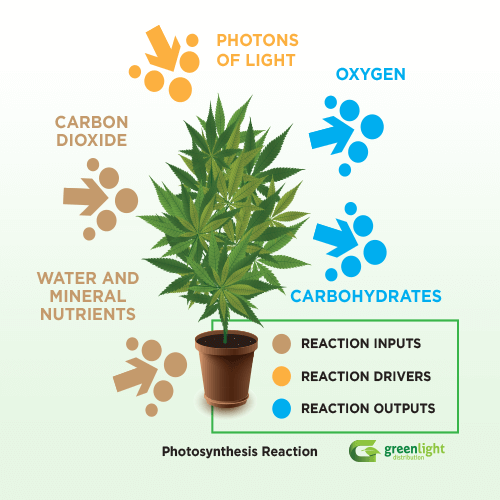 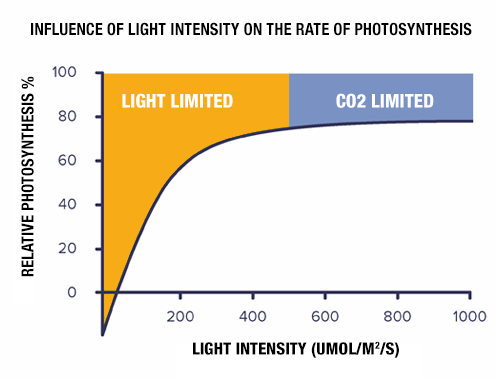 During establishment growth, light intensities need to be kept relatively low as the cannabis plant is developing leaves and stems that will be used to provide photosynthates during the vegetative growth phase. Increasing light intensity as you transition into the vegetative and reproductive growth phases will increase the rate of photosynthesis, which will provide the plant with more photosynthates used to develop flower.

Contact Greenlight for more information about LED lights and how to optimize your grow rooms.

Join our new Cultivator Club for discounted member pricing on every product.